sorry you lost me. YOu have an example, sketch?
Somthing a stupid electrcian can look at? ;)

See you around
Frank

hologram idea.png
I mean something like sketched in the attachement:
- Everything goes into the base.
- From there a light pipe goes up with the LED PCB mounted.
- Under the light pipe a IR LED is mounted which transmit serial data in the Mhz range
- by some ingenious idea we cut a 'window' in the light pipe so that a photo diode on the LED PCB picks up the light of the IR LED
- The light pipe sits in a bearing with some gears attached which is directly driven by the motor in the base
- the LED PCB has a coil on the lower part which sits directly on the lower side and hovers over one or more other coils to produce the power for the LEDs (this will be funny too)
- The induction of the coil can perhaps be also used to detect the zero crossing of the turning LED PCB

By that we can somehow transfer the power to the LEDs and get the signals wirelessly in the LED PCB and can detect at which position the LEDs might be.

UPDATE: just rethinked it: I think it must be a rotating disk instead of a single line - my fault.
You do not have the required permissions to view the files attached to this post.

ok stupid me. I was on the wrong track for the light pipe.
There for was wondering how you want to make light in one vertical pipe displaying 3D.

I like the idea wit the coils as there we can detect position with just a little gap.

I agree it should be a disc.

See you around
Frank
Top

This chap has solved the power issue in a fantastic way (see the second video in the first link), not to mention built himself a bloody amazing clock.

How is everyone doing working on this?
A few people at XMOS, including myself, are interested to see how it's getting on.
Top 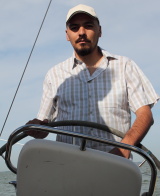 Nice idea, let me think with what can I help. I will be following this project.

P.S. the logging off thing is sporadic happening, also for me :-( I know that by removing cookies and cache works sometimes.
Top

sorry for being not to busy here. Searching a job and trying to keep the expenses low is giving me some limits more than expected. Never the less some things have happened from my side:

1. I got my XMOS Hardware and have done some first steps programming it.
2. I have ordered a second hand XKinect, hopen to receive it the next days.
3. I got a Vinculum 2 Demo Board this shall do the USB 2.0 Host for the beginning.
4. I started some search for Sponsors for the Project ;)

At this moment I am on round trip through Germany for Job Interviews. As soon as I could do the next step I will inform you

See you around
Frank
Top

This question probably fits in this thread as well as anywhere else, I'd be interested in the answer for a different potential project. Disclaimer: I am not knowledgeable about any of these issues (xs1/usb/hardware clocks), so it might be a silly question.

Will the VNC2 be able to spew the Kinect data through quickly enough to the relevant thread? The kinect camera has two isochronous USB endpoints for the raw image data which, according to the openkinect website, operate at approx 99Mbit/s (depth camera endpoint) and 72Mbit/s (web camera endpoint). I know the new FT232H can do Hi-Speed USB (ie proper USB2) which would cover these rates, but surely the 'other end' of the FTDI connection into the processor couldn't cope with these data rates, say over UART (12Mbps) or FIFO (40Mbps)?

I presume an alternative would be to build a board based on the USB3318 (I can't find an existing board that can be bought off the shelf unless anyone knows different?) and code something up using the XUD library, similar to the xmos USB2 audio solution. Would that support better data rates - if so anyone know how to work out whether this would be sufficient for the kinect?
Top

The USB3318 supports hi-speed USB through ULPI, so, presumably, the kinect can be used. Using ULPI disables the usage of many pins, so that may be a problem.

The bigger issue here (i believe) is implementing a USB master. Also, that is a lot of data to crunch through, so the processing is going to have to be near real-time, as there isn't that much RAM.
Top

So, if I understand correctly, the challenges are (1) getting the data off the xtag2 quickly when the use of ulpi leaves very few pins available, and (2) implementing a USB host in software.

Presumably (1) could by fixed with a custom board based on the xtag2 layout (including the 3318) but incorporating multiple cores to provide extra pins.

I don't suppose anyone has an open example of a USB host for xs1? Could it be built on top of the XUD library (given sufficient time) or does that presume a USB device rather than host?
Top

I think right now seems to be a good point for me to chime in.

In my last project I played a bit around with LED pixels (HL1806 LED strips) connected to the XMOS LED tile solution. The very first beginning of the solution is a bit documented in my HL1606 project. The whole thing still waits for completion & complete documentation. Last project was about 3000 pixels. But I think we can go up to about the double amount per XC-2 board. But thanks to X Link we are not really limited to have only one XMOS chips ;)

I also want to try to get pixel displays with better driver chips (WS2801 seems now the best solution to get in prefabricated pixels eg. in strips and single pixels).

But this form factor seems to be a very nice package for a real huge display.

In the mean time I also got a quite good understanding of the LED tile code, so that I positively recommend it as pixel driver.

So if you are looking for someone who can help to get the LED matrix up & running I am pretty happy to help.

But first of all: How big should the 3D Led Matrix get? Dimension & pixels?

Hi Marcus:D nice to have u on the team;)
very cool to see LED strips with motion;) thumbs up!

yes good idea to use the pixel driver.

how big the LED cube should be?, hmm good question.. well i think 8x8x8 or maybe 5x5x5 should hold at the start? what do u guys think? but under 5x5x5 then it might become a bit to small? http://www.youtube.com/watch?v=6mXM-oGggrM

The WS2801 has a quirky thing about speed. The FastSPI library requires one to slow the data rate down otherwise it just won't work. Unlike any of the other ICs supported in FastSPI.
Top
50 posts