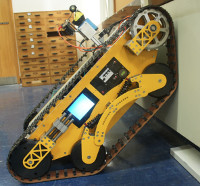 This is a tank robot which forms the top of a three-tier hierarchical system of urban search and rescue (USAR) robots. This robot contains the powerful computer hardware necessary to coordinate the autonomous actions of the Mother and numerous Daughter robots which traverse over and into the most inaccessible and hazardous terrain of a disaster zone to detect signs of human life. To assist the Grandmother with its own navigation are actuators and a diverse range of onboard sensors. These connect to the computer through a high concurrency software-defined interface bridge built using XMOS multi core microcontrollers. A number of innovative mechanical assemblies and construction techniques have been developed and used in the robot, with fabrication relying heavily on several different computer numerical control (CNC) technologies. The created robot is mechanically robust and has a high level of maintainability. It has a top speed of 5 km/h and can climb gradients of 40° with ease.
Sensors:

This robot uses two chained XMOS SliceKit Core boards. The XMOS system interfaces with an onboard laptop through Ethernet. Development began in mid-2012. The robot gathers a huge amount of data from its environment, ignores it, then drives into walls.
Images: